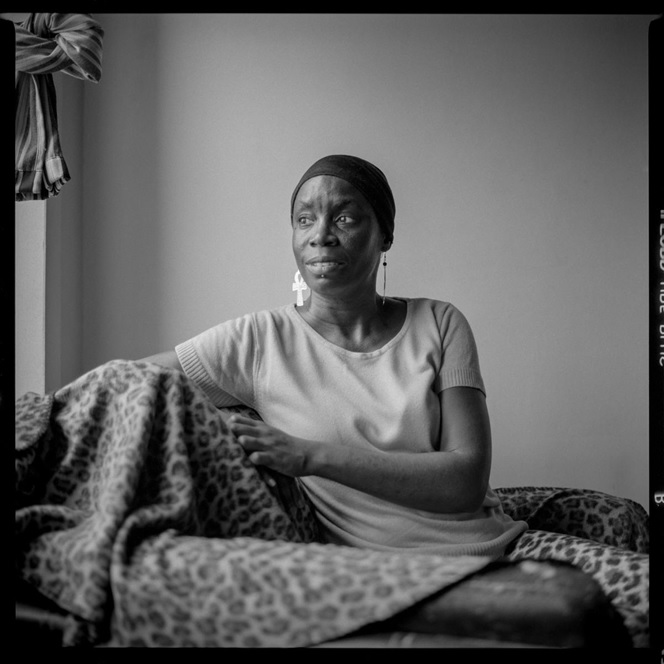 Long story short, I had my son Bilal, and his father was verbally abusive so I went into a domestic violence shelter. After 6 months our time ran out, so we were up in the air, thinking, “What are we to do?” We went to a regular shelter where we had to get up every night and go to a hotel, then leave the hotel at six in the morning and go back to the family shelter. I’m HIV positive and my son was a baby, and I was like, “This is not going to work for me with my child.”

I interviewed with Praxis, and next thing I knew they brought me to the apartment. I only had to see the living room and I said, “I’ll take it.” My son ran around the kitchen and came back. He was 13 months old then. Now Bilal’s applying for high schools for next year. I told him, “This is your last year, pull them grades together.” I had to give him a little tough love. Bilal wants to be an EMT or a paramedic, to help people, so tonight we’re going to the FDNY High School for an open house. We gonna work it; we do what we got to do.

Praxis staff, they’re always here. Like my psychiatrist Yvette: I was going through a lot recently and I had to call her. See, I had a hysterectomy done in April, and I have hyperthyroidism and HIV, and then on top of that, I’m suffering from HPV which I didn’t even know I had. The hospital said, “We’re going to find out if it’s cancer or pre-cancer.” I was scared to death, making plans and writing my will. I called Yvette and told her about it. “Shmane, calm down,” she said. “You know if you need me I’m here.” I love my caseworker Tiffany, too. She’s resourceful. I can talk to her about things and she will know exactly what to do.

I’m studying for my GED. I need to do that, especially with what’s going on right now. Yesterday was the crazy election, and I don’t know what the hell’s going to happen tomorrow. My son has a Muslim name, so I worry about that. That’s some scariness. Be we fought before. Back in ’91, we went and fought for Medicaid, we may have to do it again. If I have to, I’ll go to Albany and stand on the steps and tell them, “Listen, this ain’t fair, this ain’t right.” I’ll be there.